Greece is safe from a disorderly default, but not out of the woods yet. The European Union and the International Monetary Fund approved Greece’s second rescue package – worth €130bn – after 13 hours of difficult deliberations. This is the good news.

The bad news is that Greece is still wading neck-deep in murky waters. Worse still, the country’s economic crisis (the worst since the second world war) can be transformed into a crisis of confidence between its people and the state – regardless of which party is in government. 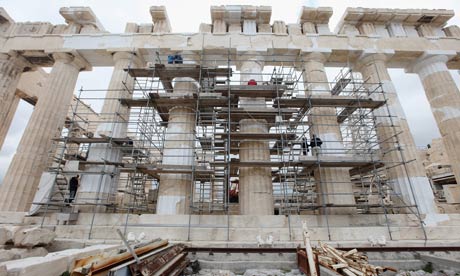 Greece’s chance to rebuild … restoration work takes place on the Parthenon in Athens.

Greeks are starting to question whether their economy can ever be revived. They are losing faith and growing increasingly pessimistic about whether the sacrifices they are making will be enough to end the crisis.

How possible is this? The real economic situation in Greece is worsening. The unemployment rate has hit a record high, currently 17.7% and close to 50% for young people. Pensions and salaries are being cut. Businesses are shutting down every day. New taxes are being levied. The “informal” labour market is swelling – it’s pushing 50% of the country’s potential workforce.

And as fear and insecurity spread, many Greeks are packing their bags again and leaving their country. They want a new political system. Dissatisfaction crosses party lines, as people are no longer willing to play by the old rules of empty pre-election promises. They want to see results.

Even the smallest amount of progress, however, will require politicians to roll up their sleeves and propose viable reforms that can and will be implemented. What we need is radical structural reforms that will help us to rebuild the country’s wobbly foundations of productivity. We need reforms that will promote entrepreneurship and generate new ideas.

We need a new set of rules that will allow for the smooth transition from the informal to the formal economy. One example is through the simplification of process and deregulation of markets – a simple and fair taxation administration system would be more efficient and would create a friendlier business environment. This would increase the investment possibilities in Greece not only for foreign investors, but also for local ones.

The country was brought to the brink of bankruptcy. Though safe – for now – Greece could find itself struggling to meet the strict conditions outlined in the second bailout memorandum if these key structural reforms don’t take place.

Let’s not forget, however, that there are no quick fixes for the Greek economy. Any viable solution will require a lot more than just another round of bailout and austerity measures. The new measures include an immediate 22% cut to the minimum wage and the elimination of 150,000 public sector jobs by 2015.

The alternative, however, would have been a messy default – a nightmare scenario that would have opened the floodgates and piled on more misery. It would also guarantee our ousting from the world markets for at least 20 years – our partners would make sure punishment would take place.

As such, a solution would directly benefit the eurozone. This is why we need to focus on the structural and institutional reforms. Though these reforms will take time to bear fruit, they will eventually yield the best results.

Success depends on how well we can reform the Greek state. What we need to do is simplify judicial services and enforcement of rules and laws. We also need to apply quality control on goods and services, eliminate organisations with overlapping mandates and rationalise the public sector.

It’s not too late for the crisis to serve as an opportunity. It might, however, be Greece’s best chance to make all the necessary changes and put the country back on the path of prosperity.