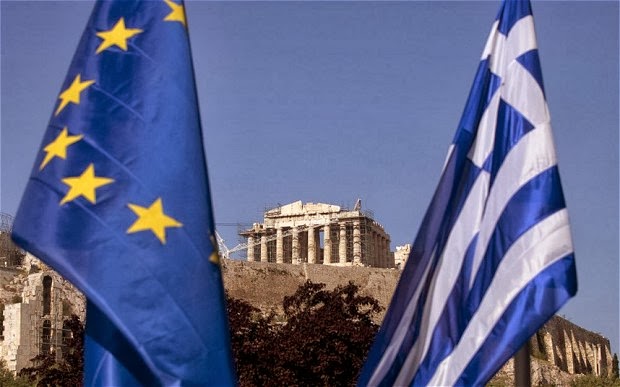 Bruised and confused: why Greeks voted against the gods of Europe

Ravaged by austerity measures and caricatured as lousy managers and born tax evaders, the Greek electorate went left and right in their efforts to say no to the EU

In last month’s elections a majority of Greeks – now routinely depicted by the gods of Europe as lousy managers and born tax-evaders – reacted by shunning the pro-EU parties. They made the anti-European and populist left and far-right parties the rising stars at the polls. Even Syriza, the radical (though not so radical any more) leftwing party that secured 26.6% of the votes did not do as well as expected. Once very anti-austerity and ready to go up against Brussels, it has since watered down its tactics.

Analysing the results via ideological labels is perhaps less important than seeing beyond the political shake-up to the bruised reputation of a very proud people. The Greeks now often feel like unwanted guests at the EU table.

Add to this feeling the economic realities: the imposed never-ending austerity, GDP reduced by 30% and nearly wiping out the middle class, and the grim future Greek people face with youth unemployment running at over 60% (28% overall).

From the start of Greece‘s economic crisis, most of the richer EU members were emotional and openly angry, blaming the Greeks for all their woes when in fact it wasn’t a problem of household private deficit and overspending, but of public sector mismanagement and bad governance.

The crisis was the end result of an overly bureaucratic and cumbersome system that became even more bureaucratic because of additional European directives. A lack of transparency facilitated the mishandling of government and public budgeting.

What was so much needed was reform and simplification, allowing for transparency to build trust. This is the missing ingredient with the national government, and now EU governance.

Ironically the Greeks, in contrast with many other Europeans, have long been pro-integration since the Treaty of Rome in the 1960s. They adopted the euro – putting to rest the drachma, the oldest currency in the western world – with optimism. Compare this reaction with, say, France, where prices are still printed in both euros and old French francs. And when the troika of the European Commission, the European Central Bank and the IMF arrived in Athens to help the country put its financial house in order, they were widely welcomed. Most Greeks believed the troika could fix a broken system.

Instead, Greece’s “bail-out” packages, initially at high interest rates, were perceived clearly to be only money transfers for the Greek state to pay back its debt. Persistent austerity and fiscal measures eroded further some of the healthy forms of governance that remained (police and judiciary included). This allowed for the rise of the far-right ultra-nationalist Golden Dawn, especially in urban centres.

Not surprisingly, then, the troika’s welcome was short-lived. Those who are suffering the consequences of bad governance and politics are the middle class, the low-income earners, the pensioners receiving just ¤600 a month and now unable to cover their basic needs. They feel insecure and unprotected. Meanwhile, those who took advantage of the old ways of bad governance seem not to be touched that much. In short, the euphoric pro-European mood soured and turned into a silent vote of dissatisfaction and a clear: “Thank you, EU, but no thank you.” What did for the EU in the elections is the serious lack of leadership it has shown in tough times. The euro crisis, for instance, was persistently not seen as such, but blamed as a Greek crisis for its first three years.

More specifically, the stubborn unwillingness of Brussels to use its powers to make quick decisions and avoid the spreading of the crisis constituted a supreme error.

Instead, decisions were offloaded on to the national parliaments. The same parliaments were never asked to approve European subsidies on common agricultural policy or regional harmonisation policy.

The reality was a non-handling of the crisis. We observed the lack of any leadership and responsibility. This created two very different forms of punishment. The first, from the markets, spread the euro crisis and credit “downgrading” of several countries, including France (the second pillar of the Union with Germany). The second punishment, carried by grassroots anger, came from the people, demanding a change of the EU, as seen in last month’s elections

So, in the case of Greece, this is a response to the blind following of austerity which prolonged recession and created a great depression – as well as producing greater inequalities and making a recovery difficult to see.

In the north (France, Germany, Austria), the Eurosceptics are gaining for different reasons. The people are tired of being asked to give more to the south and to those “lazy and irresponsible Greeks” especially since they have their own domestic issues to address.

Leaders are asked to take brave decisions – these still haven’t been taken in Europe, and quite frankly I do not think they will be taken soon because Europe has become a big bureaucratic elephant with a life of its own. Large entities like this are not known for their ability to be flexible or adapt to the reality on the ground. I fear things will become worse before they start getting better.

A growing number of Greeks and other Europeans are now tired. They do not see any light at the end of the tunnel. Positive political statements about the end of the crisis mean very little to them. In general, the EU has disappointed the Greeks. Instead of making decisions, the EU postponed them. There was a lot of talk, endless meetings in Brussels; kicking the can down the road every time only prolonged the pain. This created anger, discontent and impatience.

Europe is no longer the club of the elite (De Gaulle and Adenauer, Mitterrand and Kohl) and these elections made it clear. Last month’s vote reflects this change. The bottom line is that the euro crisis game was played out in Greece, and the European vision has been lost in Brussels.