On Thursday private sector investors across Europe whose portfolios include Greek bonds are set to incur billions of Euros in losses as a result of the restructuring deal following Greece’s latest rescue package.

The bond swap offer is part of a €130 billion bailout package, which is expected to be taken up by around two thirds of Greek bond-holders and is likely to hit French, German and British banks.

This voluntary renegotiation deal will see affected banks exchange their current holdings for new bonds with later maturity dates and lower returns, allowing the Greek government to write off around €100 billion of its debt.

Banks and investors will be offered ‘sweeteners’ to encourage them to take part in the swap, with the funds for these incentives coming out of the €130 billion rescue fund.

Parties who accept the proposed restructuring deal are expected to lose 53.5 per cent of the nominal value of any Greek bonds, with the reduction in net present value of their investments reaching 70 per cent. 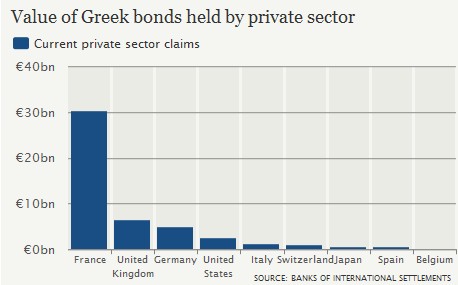 According to data released by the Bank of International Settlements (BIS) for the third quarter of 2011, the private sector of European countries who report to the BIS would lose €25.8 billion if all investors took up the swap deal.

France is likely to be the hardest hit as its private sector holds more Greek bonds than any other nation. Claims by the French private sector amounted to over €30 billion in the third quarter of 2011 but returns could be slashed to €9 billion following the swap.

BNP Paribas has more Greek bonds in its portfolio than any other private sector bank in Europe, and has already taken the step of writing down its Greek bonds by 75%. The bank announced a 50 per cent drop in profits for the final quarter of 2011, having reduced its valuation of Greek debt holdings by €3.45 billion over the course of the year.

British and German investors also stand to make big losses as the second and third largest holders of Greek bonds. The value of private sector investments in the UK currently stands at €6.4 billion, meaning affected parties will lose a total of almost €4.5 billion. 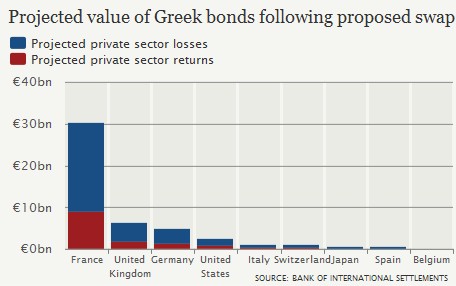 Jean-Claude Juncker, president of the Euro Group, has said that he expects a high participation rate in the swap, with the Greek government stating that it is aiming for a 66 per cent uptake.

The swap offer will run for two weeks, with bond holders having until 9 March to decide whether or not to accept the terms. Greek officials will then decide if there has been sufficient uptake for the deal to go ahead. If successful, the swap itself will take place on 12 March. 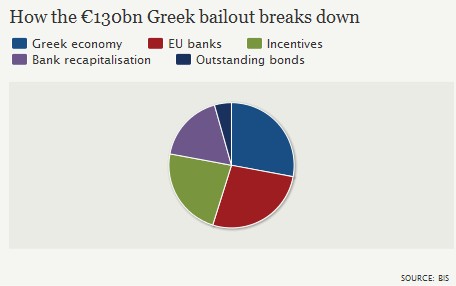 • Incentives for those who take up bond swap – €30 billion
• Funds to buy back bonds from the European central banks – €35 billion
• Funds to pay off interest on outstanding sovereign bonds – €5.7 billion
• Bank recapitalisation – €23 billion
• Leaves €36.3 billion for broader economy